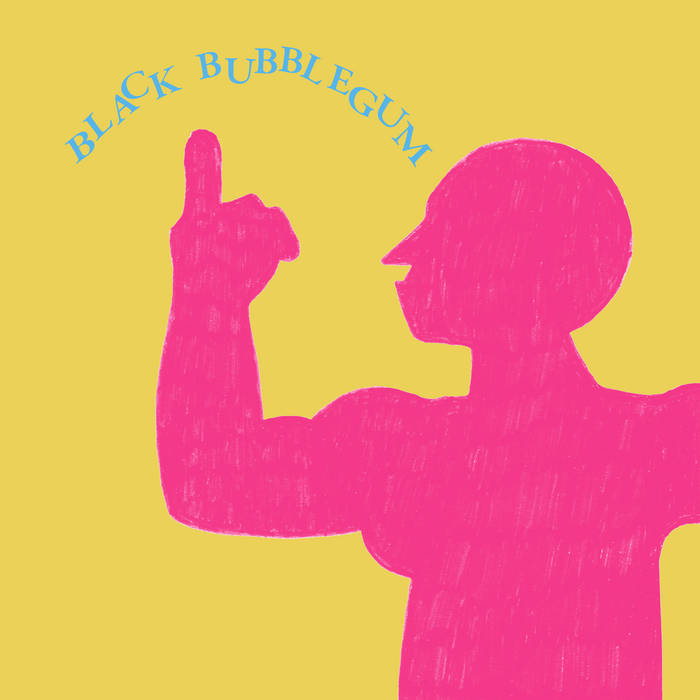 externalsignalprocessor Fell in love with Cannibal World when I came across an amature music video on youtube full of extreme body builders, which has sadly since disappeared, but hearing the rest of this album years later is an absolute treat.

Eyso Zanstra Cover says it all, screw it all :)

Black Bubblegum is the newest LP from Eric Copeland,
and we are not kidding when we emphasize it sounds like
nothing he has done in the past. The title of the record
says it all: chewy, sticky pop that doesn’t taste quite like
any chewy, sticky pop you’ve had before.
Recorded at Copeland’s old practice space in South
Williamsburg, Black Bubblegum contains songs with
more conventional sounds and songwriting than any of
his previous releases. While there are similarities with
Copeland’s earlier work in the drum patterns, major
scales and vocals, Black Bubblegum moves away from
his trademark psychedelic dub towards strange and
fantastical pop; imagine Arthur Russell going into the
studio with the Ramones. Wanting to take a more “handson”
approach to these recordings, Copeland exchanged
sample-driven tech and hardware for keyboards, guitars
and effect pedals, creating a new sound that is oddly
easy to digest despite its rejection of melody in favour of
discord and dissonance.
For a long time, Copeland considered this collection of
songs to be recordings which would never be heard. This
invariably influenced certain decisions made during the
creation of Black Bubblegum, blessing Copeland with
the unique freedom that comes from making music never
intended to be heard, let alone released.
When asked to please jot down what influenced this new
album and sound, Eric replied ”glam holes, glitter dreams,
money troubles, apocalypse paranoia, one hit wonders,
manifest destiny, my family’s westward migration, body
troubles (was passing kidney stones almost the entire
time), LGBT disco parties, Jonathan Richman, Missing
Foundation, Neil Diamond, New Orleans, poverty, getting
pushed out of another Brooklyn neighbourhood... No
Beach Boys, no Beatles, no Buddha... More Bad News
Bears.”
Eric Copeland has been sound clashing at full volume for
over twenty years, first carving out a named for himself as
one third of the legendary NY-via-Providence band Black
Dice. A wildly prolific solo artist, Copeland has played
shit houses, party palaces and seemingly everything in
between all over the world.
A long time Brooklyn, resident, Eric recently relocated
to where the L Train does not run - Palma de Mallorca,
Spain. While maintaining a relatively humble and low key
presence in a highly competitive musical world, he has
releases a prolific amount of music every year through
indie labels such as L.I.E.S., Escho (Iceage), PPM (No
Age), Paw Tracks (Animal Collective) and DFA.

Bandcamp Daily  your guide to the world of Bandcamp